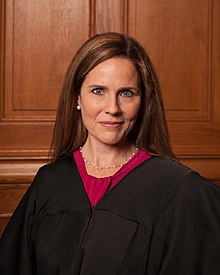 Unsurprisingly, the radical Left has already unleashed on Judge Barrett and is holding nothing back in their attacks on her. We’ve seen this before.

During a now-infamous exchange in her 2017 confirmation hearing for the U.S. Court of Appeals for the Seventh Circuit (the court that covers WI), the Senate Judiciary Committee’s ranking Democrat, Senator Dianne Feinstein, referring to Judge Barrett’s faith, said directly to the judge: “The dogma lives loudly within you, and that’s of concern.”

Barrett rightly shot down the accusation that her faith disqualified her, saying in response: “I see no conflict between having a sincerely held faith and duties as a judge.”

As conservatives, we know what we are getting with Amy Coney Barrett, and the Left doesn’t like it. They don’t want to see a successful and intelligent judge, wife, and mother of seven take this seat because they know she is not an activist judge who will be swayed by the winds of culture and “elite” opinion.

Democrats also know the debate over Justice Ginsburg’s vacant seat has incredibly important implications for the 2020 election. They know whoever fills it will impact any legal challenges arising from this contentious election.

Liberal progrssives know that a Justice Barrett will impact countless important cases sure to come before the Supreme Court in the years ahead, including what we sense maybe at hand, but have likely not yet dared to hope – a challenge to and possible overturning of Roe v. Wade.

For all these reasons and more, the contempt and vitriol aimed at Justice Kavanaugh during his confirmation process will be nothing compared to what will be directed at Amy Coney Barrett over the coming weeks. During this trying time, she will need all the support she can get!

We must fill this seat with a nominee of integrity who will deliver an unimpeachable originalist record on the high court. Judge Barrett is that type of nominee. She will be that type of Justice on the Supreme Court!

2) Pray–frequently and fervently that God will yet have mercy on us and give us the blessing of having this exemplary woman serve on our nation’s highest court. Pray individually, with your family, in your church, with friends. This, too, is part of being a good steward of the blessing of living in this nation.

This judicial seat will be VITALLY important for many of the cases coming before the Supreme Court beginning just next month! The abolition of Roe v. Wade has never been closer than now.

In addition, religious liberty is increasingly under attack, and we need a strong defender of the First Amendment on the Supreme Court. This seat will also be PIVOTAL to any litigation over the election results, which will likely come before the Supreme Court. We cannot waste this moment!

Thank you for taking time to contact our Wisconsin US Senators and for praying. May God bless you and our nation as we humble ourselves, seek Him, turn from our sin, and pray.