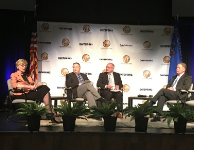 On Monday, March 16, Wisconsin Family Council (WFC) and DaySpring Church hosted, for the first time ever, the Wisconsin Supreme Court Candidate Forum at DaySpring Church in Pewaukee. Candidates invited were Justice Daniel Kelly and Jill Karofsky. Karofsky did not attend the forum and did not respond to any of our invitation efforts.

On Tuesday, April 7, 2020, Wisconsin has a critical Supreme Court election. As part of our organization’s attempt to do our best to engage with Wisconsin families about issues of great importance in The Badger State, we provided this candidate forum so you, as a voter, could take advantage of this opportunity to hear the candidates’ views on the role of the court, the upcoming election, their qualifications and more. Due to precautions stemming from the Coronavirus and in consideration of the Governor’s request that there be no events with over 50 people gathered (at that time), we were not able to allow the general public to attend this event. Instead, we made it available via our Facebook as a “live” event and our media host, VCY America, aired the event live via radio and also video recorded the Candidate Forum to be watched at your convenience HERE.

We extend our gratitude to our panelists, Daniel Reehoff of DaySpring Church and Jim Schneider, Executive Director of VCY America, as well as our media host, VCY America. We also thank Justice Daniel Kelly for his attendance and time spent discussing his judicial philosophy and responding to numerous questions from our panelists. Justice Kelly’s wife Elisa accompanied him to the forum.

IN CASE YOU MISSED IT:  If you missed the forum, you may simply CLICK HERE and watch at your convenience.