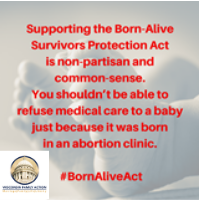 [On Monday, February 25, 2019], the United States Senate voted on an anti-infanticide bill introduced by Senator Ben Sasse (R-Neb.), the Born-Alive Abortion Survivors Protection Act. The legislation needed 60 votes to pass, and it failed by a vote of 53 in favor and 44 against. The bill stated that “if an abortion results in the live birth of an infant, the infant is a legal person for all purposes under the laws of the United States, and entitled to all the protections of such laws.”
Read more HERE.

Wisconsin Senator Ron Johnson is a cosponsor of this critical legislation.

From LifeNews:
Late Monday, after Senate Democrats voted to block a bill to stop infanticide, House Democrats blocked a request by Republicans to vote on a similar bill to require medical care and treatment for babies who survive abortions.
…
H.R. 962, introduced by Rep. Ann Wagner (R-MO), ensures that a baby born alive after a failed or attempted abortion receives the same medical care as any other newborn. It would also penalize doctors who allow such infants to die or who intentionally kill a newborn following a failed abortion.
Read more HERE.

All of this comes on the heels of Wisconsin Governor Tony Evers’ pitch to reopen state funding for Planned Parenthood (previously blocked by former Governor Walker) with his so-called “Healthy Women, Healthy Babies” proposal he has included in the state budget. Read more HERE.

Julaine Appling, WFA president, says, “The Governor is obviously proud of his pro-abortion position and his relationship with Planned Parenthood, our state’s largest abortion provider. But he doesn’t really care about babies. Abortion is not health care—not for women and certainly not for their unborn babies. Giving Planned Parenthood more taxpayer money means more unborn babies killed and their mothers put at risk.”