Julaine Appling, WFA president, says, “It’s discouraging to see the number of abortions increasing. We still have a lot of work to do to change hearts and minds. However, the data once again clearly show that the safest place for an unborn baby is in the womb of a married woman. Only 14% of these abortions were obtained by married women. While that’s still much too high, it reminds us marriage really is a difference-maker.” 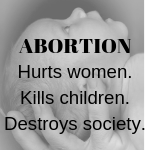 This week the U.S. Supreme Court heard arguments about a Louisiana law that requires abortion providers to have hospital admitting privileges to treat women who have emergency complications. Opponents say this requirement places an “undue burden” on women’s access to abortion. Louisiana state attorneys, with backing from the Trump administration and support from pro-life groups, contend the law is aimed at improving health and safety measures at abortion clinics. This will be the first abortion case President Trump’s appointees, Justices Neil Gorsuch and Brett Kavanaugh, will hear.

Wisconsin has a similar law that has never been enforced because Planned Parenthood filed a lawsuit against it shortly after Governor Walker signed the bill. The decision of the court will have implications nationwide. Wisconsin Family Action was honored to join with a number of other pro-life family policy councils from around the country in submitting a friend-of-the-court brief in support of the law.

Listen to the update to the case on this week’s Home Front radio program HERE.